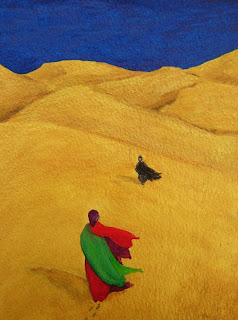 “I once travelled with a guide who was taking me to Faya. He didn't speak for nine hours. At the end of it he pointed to the horizon and said, "Faya!" That was a good day.”
Almásy

For me, one of the most striking aspects of The English Patient is its cinematography. It is superb on both the endless scale of the desert and on the intimacy of the human face. It's impossible to make the Sahara look bad, yet the film goes a step further by making the passion that Laszlo feels for it palpable. Nearly as impressive are the editing and score; the former delights in the fades between the past and present which suggest contacts across time, while the latter soars and howls with vigour, the perfect accompaniment to the pain that lives in the hearts of every major character.

The story, based on Michael Ondaatje's Booker Prize-winning novel, is told elliptically, through the histories of four characters who find themselves in a ruined monastery in Italy at the end of World War II. Slowly they reveal themselves and, in the process, the true identity of the English patient - the unknown survivor of a plane shot down over the Sahara who lies dying in the monastery - is made clear. Passion fires these stories, whether it is the raw passion between lovers, or the compulsive passion which drives men to explore remote and inhospitable regions, or to pursue across time and countries those they think have wronged them.

i agree. but my all time favourite movie has to be 'out of africa' have seen it a zillion times, and still cry buckets.

I think this is one of your best images. It´s a wonderful "scene", a thought-provoking landscape with brights colours (sand, dress...)