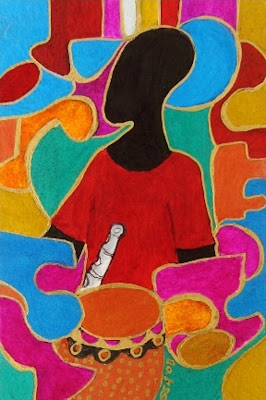 An offshoot of marabi sound, kwela is the jazzy street music which came to life in the early 50s in South Africa and is still going strong today. The primary instrument of kwela, in the beginning, was the pennywhistle, a cheap and simple instrument which was played by street performers in the townships.

The word ‘kwela’ has its origins in the Zulu word for ‘get up’, but in township slang it also refers to the police vans that patrolled the townships in the apartheid era, the so-called ‘kwela-kwela vans’. It’s said that kwela bands were often used as lookouts to warn gamblers or drinkers of the approaching police.

I don’t think anyone who listens to kwela music can resist shaking a tail feather along with the best of them! 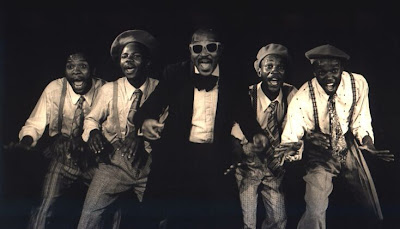 (**Tracy at Pink Purl and Elizabeth at About New York are co-hosting this wonderful around-the-world Haiku Festival and both have a list of participating bloggers if you’d like to see more of this fascinating poetry style. Thanks so much for the opportunity, Tracy and Elizabeth! It’s been great fun.**)
Posted by Tessa at 05:35

I really like the rhythm and musical feel to your poem, and your artwork adds so perfectly to the overall experience--wonderful! Thanks so much for joining us in this fun haiku event. I'm Elizabeth's co-host, Pink Purl, or Tracy as I am also known ;o) You have a great, dynamic blog!

That's a really great haiku! I better start working on mine.

I've never heard of kwela, thanks for teaching me about it.

The pictures and the information about the music completed the poem.

I went back and reread your post on tomatoes, and it is as sensually rich as the first time I read it.
Way to go.

I would love to hear kwela
sounds fascinating.
and a little haunting and many layered.

Tessa this is such a beautiful post. I can't wait to receive your print. I love coming here.

Great Haiku! It has rhythm and a beat! Also, like how it works with your artwork!

I love your haiku{and am jealous because I can't write one!} AND that painting!!! YUM!

Kwela!!!! Oh, Tessa, you exude South Africa with every sweet word. And that painting...I'm dreaming once more.

I attempted haiku poetry some years ago, then got lazy. I should try it again.

Ciao lovely friend, I'm off to play some kwela in my iPod.

I love the feel of your Haiku. I can hear the music in it.

I can just imagine how irresistibly catchy the kwela can be. . . from your description, haiku, and those groovin' men! I love the vibrant colours in your illustration.

Hello Tessa
what a wonderful word kwela is to say...it sounds so musical - swaying hips...
Your illustration also suggests the sounds of kwela enveloping the musician and the listeners...
Lovely thank you

I want to try next time Tessa, thank you so much for the mail telling about this. But, i've got to leave in the morning, and i've run out of time for all this fun.
You are wonderful, do you know i learn something everytime i come here.
love you ☺
lori ♥

I love the stories you tell.

I feel like you are my private little story teller.

All so compatible and rhythmic. Lovely.

You've written a wonderful haiku! And of course your artwork compliments it so wonderfully :)

Your painting, as usual, is beautiful and, as usual, full of happy color.

Your haiku is very well done and, considering the subject, most unusual and unique.

I looked up kwela music on you tube and found it to be happy and energetic music and again, I am surprised that black people all over the world, under the least favorable circumstances, are able to make such excellent and up beat music. I am impressed.

That picture is fabulous. Makes me want to jump up and start dancing around.

I like the rhythm of your haiku. And thanks for sharing some interesting facts about kwela!

Woman in a Window said...

Yes, I get the sensual of it, too, but then that is the whole of music and art, isn't it? Wonderful.

Lovely! The colors are gorgeous! Love the Haiku!