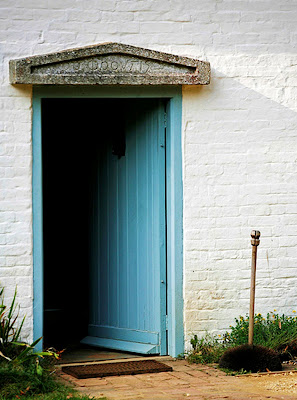 "The little things creep out to patch themselves hovels/in the marred shadow/Of your gift."

Clouds Hill is the tiny cottage in Dorset to which T.E. Lawrence escaped to after his adventures in Arabia to revise his manuscript for Seven Pillars of Wisdom. When we visited last summer, I felt no sense of this austere little house being a home, despite the pretty blue door, the sun-washed walls and the gentle coo of wood-pigeons in the surrounding wood. Over the door are the Greek words Ou Phrontis which mean “Don’t care”. I left Clouds Hill wondering what was really meant by that meticulously chiselled phrase. Lawrence never really lived anywhere. His was a restless soul, which seemed to demand a contradictory desire to lock itself away. The cottage is essentially a man’s den, owned by a man who in a way never grew beyond his solitary childhood, although he saw and experienced much more than most men ever do.

Even his dedication in Seven Pillars of Wisdom remains a mystery. Who, or what, is “S.A”?


I loved you, so I drew these tides of men into my hands
and wrote my will across the sky in stars
To earn you Freedom, the seven pillared worthy house,
that your eyes might be shining for me
When we came.
Death seemed my servant on the road, till we were near
and saw you waiting:
When you smiled, and in sorrowful envy he outran me
and took you apart:
Into his quietness.

Love, the way-weary, groped to your body, our brief wage
ours for the moment
Before earth's soft hand explored your shape, and the blind
worms grew fat upon
Your substance.
Men prayed me that I set our work, the inviolate house,
as a memory of you.
But for fit monument I shattered it, unfinished: and now
The little things creep out to patch themselves hovels
in the marred shadow
Of your gift.
~ T.E. Lawrence

** To see a veritable wealth of fantastic shadow shots form every corner of the globe, pop on over to HeyHarriet and indulge! **

Love the blue door. I love painted blue doors and windows so much I gave mine(door)the same treatment!
A wonderful fasinating peek into T.E. Lawrence, thank you Tessa for sharing!!
xx lori

It look so lovely, with a kind of Grecian invitation to it, sad then that it holds no sense of being a home of any sort. I wonder how it feels about being the way it is?
Isn't it interesting, how people can see the world yet never grow beyond, travelling, yet staying in a state of stasis.
That poem is so tragic, so filed with unfulfilled longing.

My grandmother, who was a teacher and introduced me to T.E. Lawrence and cc cummings always said he was a recluse who, though he longed for solitude, could find no empty space to squat...I guess she was right.
Sandi

You have an award on "Amanecer en la Habana".

Hi ~ I do care. And I do love blue doors, sun-washed walls...your writing has a gentle rhythm to it which makes it easy to follow. Interesting facts about T.E.Lawrence - thanks for sharing.

Oh! oh! oh! (clutch hands to chest) beautiful post!
I lived in Olive Schreiners house for a month. I'm sure I caught her dreams.
Oh, yes!

I do love white washed walls and blue doors and I am sorry they weren't able to contain and soothe his restless spirit.

The poem is wonderful and sad and universally attractive for we all have known this kind of loss. We bond to death as easily as we bond to life.

Thank you for this thought provoking post. You are full of surprises.

You do know how to make a girl think...but the picture does invoke curiosity n'est ce pas? French;)

Gorgeous picture and a post to match. Quite taken with the boot scraper!

loving the door and words :)

Is there anything more evocative than a blue door...

Perhaps only your provocative words to go with it...

Sometimes no matter how we paint the exterior... the internal landscape remains totally different...

He sounds so sad and lonely. I hope his soul has found peace.

Tessa, when you are an aquarius, you must have your birthday soon?

What a stunning photograph and the colour of the door really draws me in - wanting to know more.

P.S. I took the quizz and I am Marianne Dashwood too - hello sister!

It just goes to show that what is on the "outside" doesn't necessarily reflect what's on the "inside".
His cottage has a solemn and simple beauty...one can only wonder what the "inside" was all about.
As usual, Tessa, I love this post.
Barb