He closed his eyes, did a rather alarming whirling windmill arm movement and whacked his forefinger down on the map. “Nope, you’ll have to try again,” I ordered. “You’ve landed in the middle of the Atlantic.” But he lifted his finger and there, in the vast empty blue of the Atlantic ocean, was a tiny speck. We leaned forward, peering myopically at the little brown dot stranded off the coast of Morocco. Madeira! The Pearl of the Atlantic, the Floating Garden, a broken fragment from the lost continent of Atlantis! I sighed happily. Ahhhh, the perfect place for our Christmas holiday this year. “Have some Madeira, m’dear……” The words seemed to ring in my ear. 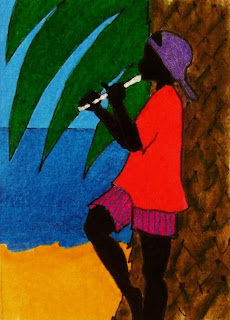 The last time we spent Christmas on an island was when we lived on St. Thomas in the Virgin Islands. One year Guy and I hosted a razzmatazz on the beach……….

Come down to the beach on Christmas Day
You're invited for brunch at Magans Bay
There'll be champers on ice, plus a turkey or two
And Guy will cook breakfast especially for you.

He is terribly talented, an ace on that grill
He performs with panache, you're in for a thrill.
With sausages sizzling and bacon all crispy
He'll waltz round the fire, a Rumanian gypsy.

His spatula waving, his tongs all a-blaze
He'll give you a meal to delight and amaze.
After you've eaten, and passed out for a while
We'll dance a fandango with passion and style.

We'll then play charades, what excellent fun
Or just flop on the sand and soak up the sun.
You could glide underwater and talk to a fish
Or oogle the crowd for some leggy young dish.

We live on an island, a mere dot in the sea
Where Christmas is different, as different can be.
So don't sit at home in the gloom and the dark
Come down to the beach for a bit of a lark.

The party ended with the sun sliding gloriously below the horizon while we listened dreamily to the sweet music of a penny whistle played with subtle mastery by a little fellow who had appeared from behind a palm tree as if from nowhere.

very, very cool!
I suppose you're tired of the Gauguin comparisons.

oh no i missed your nablopomo art, this is great.