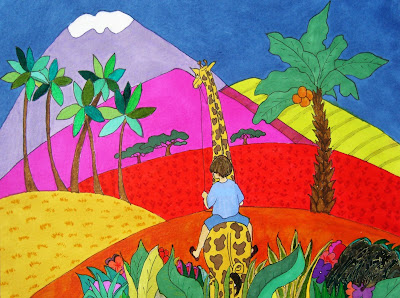 LouLou's Kitchen
Henry has a LouLou. She was already there when Henry was born and so she is probably very, very old. But that doesn’t matter because Henry and his LouLou are exceptionally good friends even though Henry is four and LouLou is probably about 104.

The thing about LouLou is that she has a kitchen which is quite unlike anyone else’s kitchen. It is an adventure kitchen and quite positively exclusive to Henry and LouLou.

Over in one corner there are a flock of Toucans with bright yellow faces and bendy red beaks and colourful feathers which float about madly when they fly. Underneath them is a cross-eyed goat which Henry is not too sure about.

And if you look up over there you’ll see a big blue, yellow and red crab with poppy-out-eyes and claws that don’t pinch at all. {Aside: Henry and LouLou look for real crabs on the beach sometimes. But only when they are not busy galloping in and out of the sea and making castles and shell covered thrones for Henry to sit in. Quite often LouLou calls Henry ‘My Little Prince’. She’s probably a bit of a looney, really}

Now, over here is a huge orange and black butterfly who flaps his wings when you pull the little white knob on the end of a string. See? Fun, huh?

Come here, near this big white jug of bright red poppies and you can see a whole family of geckos scuttling and scurrying up the wall. They’ve got lots of dots and patterns painted on them in every imaginable colour and just look at those long swirly-whirly tails.

If you look in that cupboard over there – yes, the one with the glass front – you’ll see a cow and a ginormous white fish and two fat birds and a chicken. They are all dishes you can put food in, you know. When LouLou sets the table for dinner it looks like a farmyard with a fish pond in the middle.

LouLou just loves cows. Henry reckons it’s because cows don’t answer back. Look at those paintings on the wall. Galores of cows. Why, there is even one jumping over the moon!

In this corner, right next to that fat furry gorilla with the Aussie bushwhacker hat on and strings of African beads around his neck, is a giraffe. {Aside: LouLou painted a picture of Henry riding a giraffe after they had played the ‘Let’s Go To Africa for an Awesome Adventure’ game. You can see it if you look up there}

See that pig? The one with pink polka dots behind that green bowl of goose eggs? No, no! Don’t touch the eggs – they’ve been there for about a hundred years because LouLou thinks they’re too pretty to cook and Mzee (that’s LouLou’s husband and he belongs to Henry as well – more about him later) says that if they get broken they’ll stink the whole house down. Imagine that! Henry had no idea that a house could fall down because of a stinky egg. Henry says the wolf could have stopped huffing and puffing if he’d had a very old goose egg. {Aside: LouLou says Henry is a genius}

On top of that little cupboard next to those two huge paintings of Henry-doesn’t-know-what are three Indian princes with sparkles and turbans. Here is a big zig-zag zebra and over there is a palm tree with gold and green fronds. Oh, and here is a painted tin cockerel playing a drum and another one blowing the trumpet.

Along that beam over there are lots and lots of dried roses from LouLou’s garden mixed up with a long strings of garlic, bunches of lavender and herbs and a copper pot or two. Oh, and that bunch of wooden fish. No, you can’t eat them, silly!

See that fridge in corner? The one with the art gallery and the spotty bugs on the front? On top of that is LouLou’s bird table. There are wooden birds and wire birds and fat birds and thin birds and really, really odd birds. {Aside: LouLou sometimes keeps ice-cream in that fridge. Mango ice-cream. And coffee ice-cream for the grown-ups ‘cos it’s got wine or whiskey or something in it}

And finally, here is Mzee’s clock. Henry and Mzee are the only two people in the whole entire world who are allowed to touch that clock. Once a week, Mzee lifts Henry up onto the counter and they open the glass that protects the hands that tell the time. Then Henry opens the little door on the side and gets out a very big, very old fashioned key. Mzee puts the key into a hole in the front of the clock and Henry winds and winds and winds until the key can’t turn anymore. They listen carefully until they hear the clock say ‘thank you’ in tick-tock-clock language and only then does Henry put the key away until next time.

Hehe - I love the "galores of cows" line. I have been in kitchens like that :)

What an awesome blog you have here. Thank you for sharing your wonderful talents!

Thank you for your comment and visit my blog. Nice work you have here!

What a lovely tour with Loulou. Lovely colorful art to illustrate the story with here. Cheers! (Thanks for your kind comments!)

Wonderful piece... love the colors. Looks like fun, too!