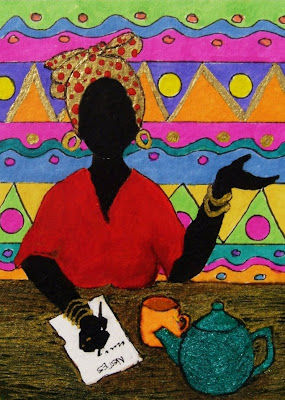 I wrote a novel. It took me just under a year to complete and it was one of the most exciting things I’ve ever done. I loved it.

Of course, I did it without following any of the rules. No beginning, middle and end roughouts for me. I just began. And I couldn’t stop. I wrote all day and sometimes into the night. I wrote while eating breakfast, while driving and shopping and while having coffee with friends. I wrote in the swimming pool, on the beach, during dinner parties and while sitting on the loo. Every now and then I would fire up my computer and type like one possessed, leaving smouldering trails of smoke across the keyboard and a thousand words in the can.

Each character came alive for me, each became my friend or, in some cases, my enemy. I loved and understand the two protagonists as though I had lived with them all my life. I introduced all the players to my family and we’d finish a couple of good bottles of wine without noticing as we discussed, probed, bullied, cajoled, applauded and set new scenes for them.

“Don’t you think David is being weak? I think he should take a much firmer stand with Patti.”
“Anton has his shoes made at Lobbs, absolutely no doubt about that.”
“No, no – not Orlando Bloom! Too……well….pretty.”
“What? Have her arrested? Oh, you couldn’t…..”
“Gak! I could throttle Didi. What a self-serving uber-bitch!”
“Where? The apartment in Paris or his house in Cap Ferrat?”
“Jana’s had a crush on David for years.”
“I think Geoffrey Palmer would be perfect as Sir Thomas”
“But, surely hyenas would…….”
“Who’d you think should play Kit in the movie?”
“He’s probably a Vivadi man.”
“Okay, so Medli has dealings with those breeders in Hong Kong?”

All too soon it was time to write the denouement and a final chapter, wrap the manuscript up in brown paper and go seek my fortune. I consulted my Artists and Writers Handbook and sent a synopsis to every publisher in the British Isles. Meanwhile, I wrote the film script.

The mail poured in. I knew then how it felt to be adored and admired. I chose a photograph which made me look both sultry and intellectual to adorn the back cover and author’s blurb. I practised being interviewed in the mirror, cocking my head slightly, pursing my lips and flinging my hair back so it shone like burnished mahogany under the studio lights.

Trouble is, every single envelope contained a rejection slip. Some were polite, some encouraging, some even asked for sample chapters and some were not even signed by the tea lady. I was aghast. How dare they, the hairy nincompoop knuckleheads! I shall submit the manuscript to American publishers – those guys can smell a best seller an ocean away. I had a friend in New York send me $50 worth of stamps and I got going with the self-addressing. Meanwhile, I wrote the play of the film adaptation of the book

Finally, my halleluiah moment arrived. The book was accepted. I rushed out and bought a case of Cava - vintage champagne was not available in Kampala - and had a party. It was a rip-roaring success. The party, not the book. A small firm of publishers in Oregon got The Meddler into print and then promptly went bust.

But we love your writing Tessa, so don't ever stop!

I agree with Danielle on this one!
And once again a beautiful painting!

Tessa, Write another one! Famous authors never get success on the first attempt. You can do it Tessa, and you had soooo much fun doing it!

Well, but if you read the biographies of all "famous" writers, this happens you know. Lots of rejection until finally one takes, then another, then another. I suppose the trick is just to keep on trying. Ah...and nice illustration to go with the post.

but you are PUBLISHED… congrats on that…

Beautiful painting!
And thank you so much for your comment :)

Sometimes the real joy is in the creating. You could always self-publish, and you know a few folks who would buy. ;-)

Oh my! Just because they went bust, does that mean you can't submit it to another publisher???
I loved this story about the process, so the book must be awesome!

Your tale is a saga in itself.

I have that dream of writing a novel. I long to be swallowed by that passion you described. I can taste it. I just can't think of a story! How pathetic is that!?