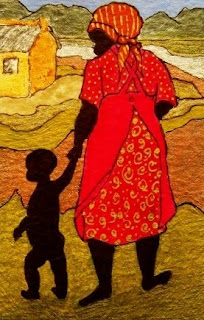 Visit with Gogo (grandma)
Mapenzi had decided a long, long time ago that his Gogo was the wisest and
most wonderful Gogo this side of the Limpopo. He loved to go visit with her because she gave him special treats, like sudza with honey trickled over it or maybe a slice of bread with the jam she’d made from the fruit of the Marula tree in her yard. But the very best thing of all, were the wisdom stories that Gogo told him. After he’d eaten, Gogo would wipe Mapenzi’s face with the palm of her big, warm hand and settle him onto her lap. Mapenzi would then snuggle contentedly into the Gogo softness and before plopping his thumb in his mouth he would say, “Gogo, please tell me a story.”
“Yebo, my little one,” Gogo would answer, and Mapenzi could hear her voice, so gentle and soothing, deep down in his heart. He would close his eyes as Gogo began so he could see the pictures in his head.

Long ago a wicked lazy hunter was sitting under a tree. He was thinking that it was too hot to be bothered with the arduous task of stalking prey through the bushes. Below him in the clearing on the grassy veldt there were fat springbok grazing. But this hunter couldn't be bothered, so lazy was he! He gazed at the herd, wishing that he could have the meat without the work, when suddenly he noticed a movement off to the left of the buck. It was a female cheetah seeking food. Keeping downwind of the herd, she moved closer and closer to them. She singled out a springbok who had foolishly wandered away from the rest. Suddenly she gathered her long legs under her and sprang forward. With great speed she came upon the springbok and brought it down. Startled, the rest of the herd raced away as the cheetah quickly killed her prey.

The hunter watched as the cheetah dragged her prize to some shade on the edge of the clearing. There three beautiful cheetah cubs were waiting there for her. The lazy hunter was filled with envy for the cubs and wished that he could have such a good hunter provide for him. Imagine dining on delicious meat every day without having to do the hunting himself! Then he had a wicked idea. He decided that he would steal one of the cheetah cubs and train it to hunt for him. He decided to wait until the mother cheetah went to the waterhole late in the afternoon to make his move. He smiled to himself.

When the sun began to set, the cheetah left her cubs concealed in a bush and set off to the waterhole. Quickly the hunter grabbed his spear and moved stealthily down to the bushes where the cubs were hidden. There he found the three cubs, still to young to be frightened of him or to run away. He first chose one, then decided upon another, and then changed his mind again. Finally he stole them all, thinking to himself that three cheetahs would undoubtedly be better than one.

When their mother returned half-an-hour later and found her babies gone, she was broken-hearted. The poor mother cheetah cried and cried until her tears made dark stains down her cheeks. She wept all night and into the next day. She cried so loudly that she was heard by an old man who came to see what the noise was all about.
Now this old man was wise and knew the ways of the animals. When he discovered what the wicked hunter had done, he became very angry. The lazy hunter was not only a thief, he had broken the traditions of the tribe. Everyone knew that a hunter must use only his own strength and skill. Any other way of hunting was surely a dishonour.
The old man returned to the village and told the elders what had happened. The villagers became angry. They found the lazy hunter and drove him away from the village. The old man took the three cheetah cubs back to their grateful mother. But the long weeping of the mother cheetah stained her face forever. Today the cheetah wears the tearstains on its face as a reminder to the hunters that it is not honourable to hunt in any other way than that which is traditional. 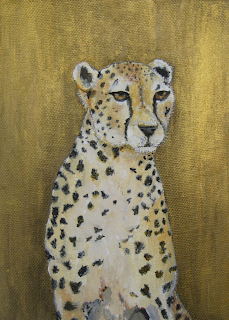 You don't know this, but the cheetah is my favorite animal (and my animal totem). Very cool!!

:))
Il like your illustration, but I speak so bad English... I dont know understand the story. But I like it!!!!

Is Nablo Pomo a project? It's fantastic! :))
Congrat!

I love the Visit with Gobo...wonderful illustration. Great colors and composition and has a great graphic feel. Well done!

This just blows my mind! AWESOME and BEAUTIFUL!! The rich colors! You create such word pictures. The story is so interesting. You really did it with this piece. Oh why wasn't I born rich so I could purchase this wonderful piece? You have out done yourself this time!

WOW your work is sooo gorgeous, and your story too! Very nice!

Thank you for the compliments and kind words that you left on my blog regarding the IF: Wise illustration of my Nana.

Keep up the great work!
--John

Thank you for sharing the wise-tale. Your work is very expressive and bold. Wonderful