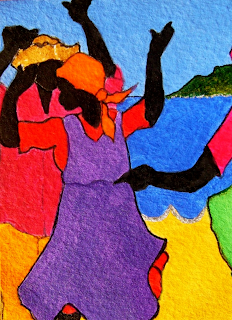 Victory Dance!
I’m dizzy with delight and jubilation. Yay, Obama! My heart sings for you, America!

Here is another story:

The mist curled like a gossamer ribbon through the valley and as the sun kissed the hills above it, Kampala came into focus like a city from a dream. The mosque dome shone like a polished jewel in its encircling crown of ivory minarets and the air smelled of wood smoke and eucalyptus. Clustered buildings glowed pink in the early morning light and red kites soared above them like shadowy angels on gentle thermals.

Luca, our askari, waved his AK47 in the air with enthusiastic vigor and did a stomping dance of delight as he opened the gate for us. “Yoweri Museveni!" He bellowed, “freeDOM fighter!” Then, wiping a hand down the front of his khaki jacket and smiling his familiar wide white smile, his eyes sparkling with merriment, he shook hands with each of us in turn.

As we walked from the house to join the crowd on the airfield, I heard the whack-whack thrum of a helicopter overhead and watched as its gleaming underbelly loomed large and then disappeared down behind the line of trees in front of us. A gangly marabou stork, looking for a grasshopper breakfast, pecked at the grass on the verge beside the road and gave us a mad, lopsided stare as we passed him. Once the sound of the helicopter had diminished, birdsong swelled again like a cresting wave.

Idi Amin and Milton Obote had soaked this lush, sylvan country with the blood of several hundred thousand people until Museveni and his heroic bush army saved it from total devastation. This was the day he would be inaugurated as President of Uganda and we wanted to be there when it happened.

The airfield was ablaze with the swirling, vibrant colours of the Ugandan traditional dress and highlighted by dazzling white kanzus which men wear for special occasions. We joined the crowd and people around us smiled and shook our hands, their faces alight with the joyful anticipation of a new day and a new dawn. The agony of decades of civil war behind them, they surged forward, taking us with them and making us theirs. We heard the pulsing drumbeat of victory and the high, melodious chant of beautiful clear voices which grew louder as we moved forward towards the podium.

Suddenly the crowd parted and in the space they left between them, a line of tall, powerful Karamojong warriors danced forward making a deep, sonorous hissing sound which rose higher and stronger until it sounded like the bottom note on a cathedral organ. Behind them, in a large, slow moving truck Museveni stood proudly, holding on to the roll bar with one hand, waving and acknowledging the surging crowd with a warmth that was palpable. He looked every inch the statesman.

As he reached the podium and climbed the steps to the microphones there was a sudden silence. I looked around at the sea of faces and, for the first time since we’d joined in the celebration, I realized ours were the only white faces amongst them. We were Mazungu….but nobody had noticed. Or if they had, they had disregarded it and embraced us as theirs. My heart swelled with pride and I turned back to face the podium to listen to a hero speak.

i'm excited too for Obama's wins. to me he's an international representation and the best person to rule a country with such diversities. happy art making!

Tessa...what wonderful art!! You use alot of color like me! I love it! Beautiful! Thanks for stopping by and commenting on my work and my friend!

p.s. I read the book 'A Distant Grief' by F. Kefa Sempangi...the horror Amin brought to Uganda was horrific, devastating and pure evil...it truly broke my heart...oh what a new beginning must have felt like...

The colours in this are so joyful - a lovely illustration for the story. I like the cropping, too. It's very effective, like the joy won't fit on the picture, like this is a tiny glimpse of it.

it means a lot to me that obama won the race, as i was there when mandela became our first president too, and i so love mandela. he's my hero. gobamago

I LOVE your art! So colorful and energetic... thank you for sharing! Roxane